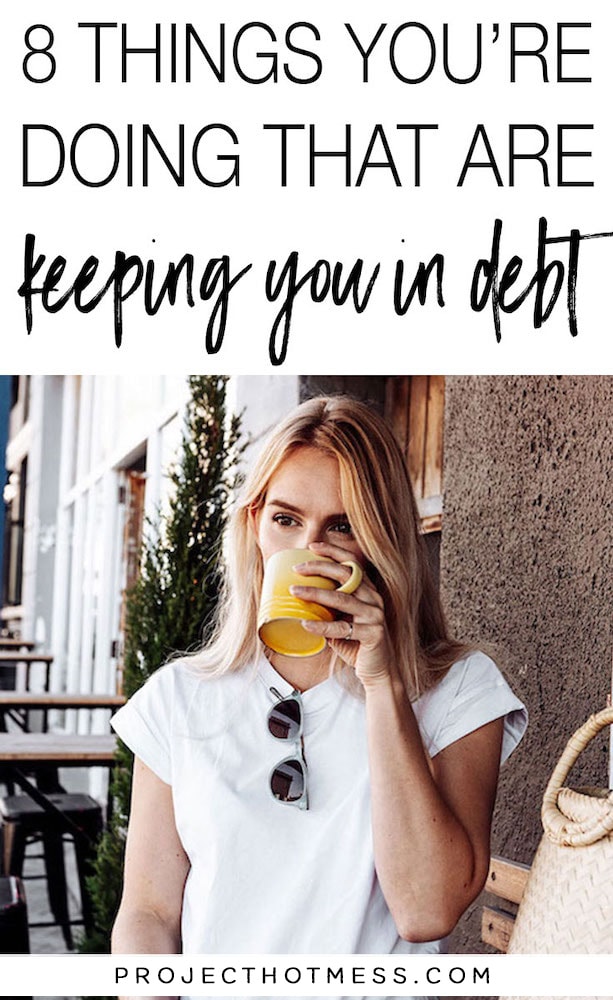 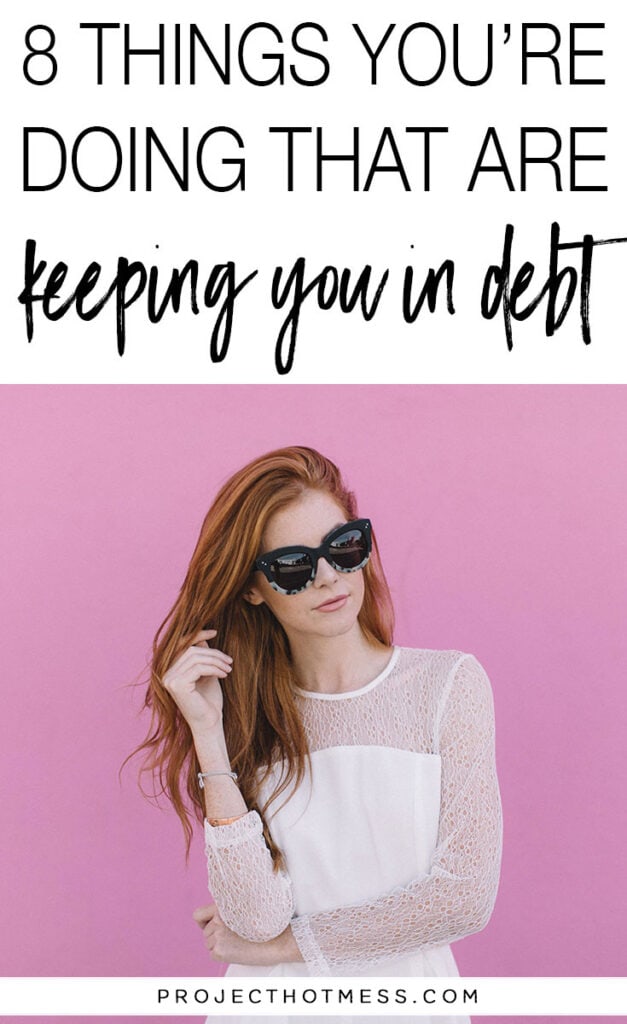 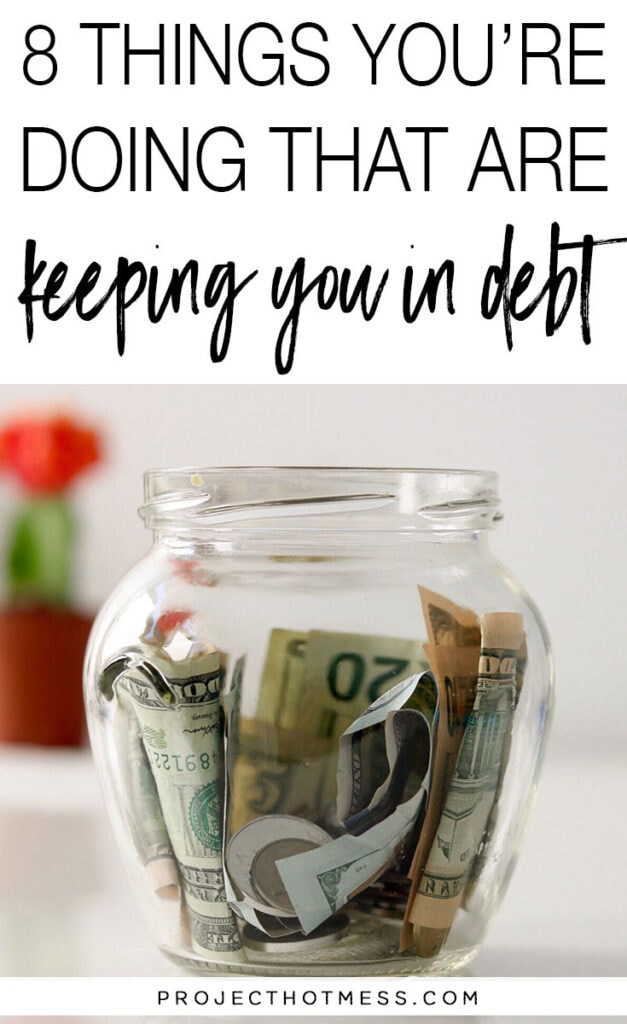 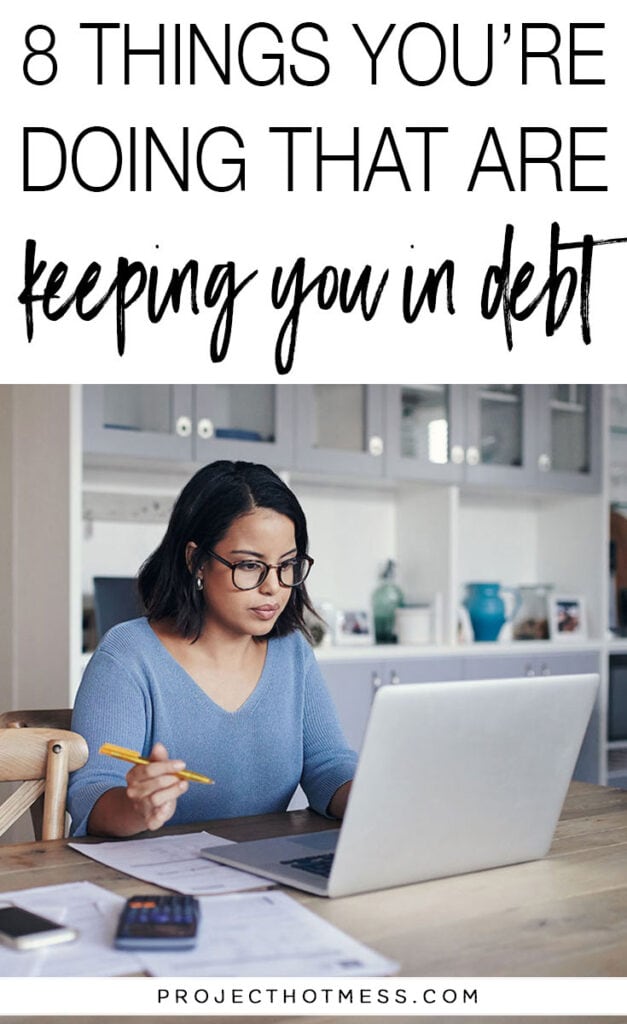 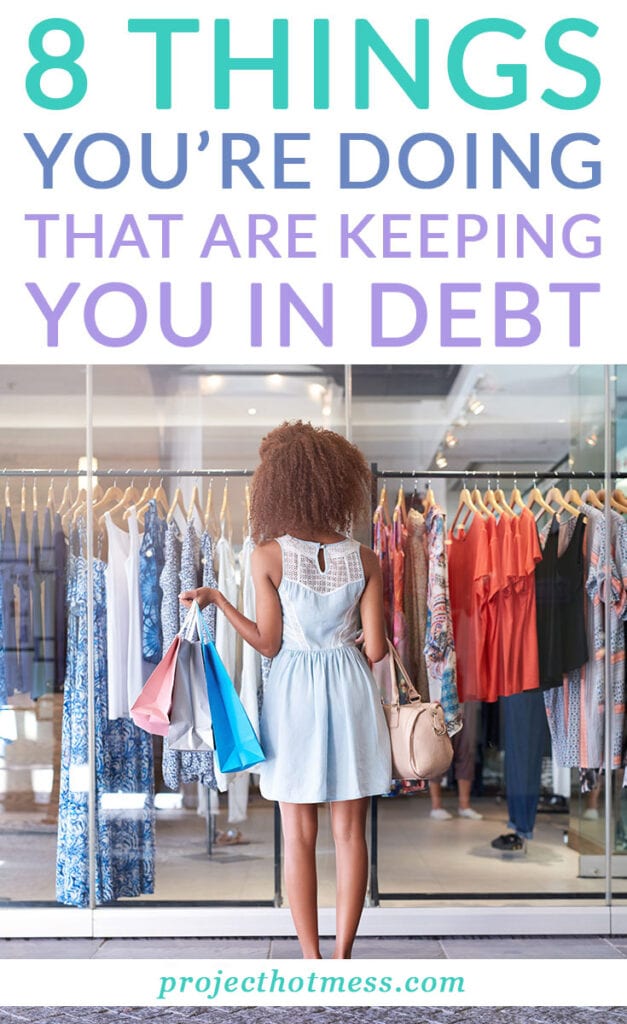 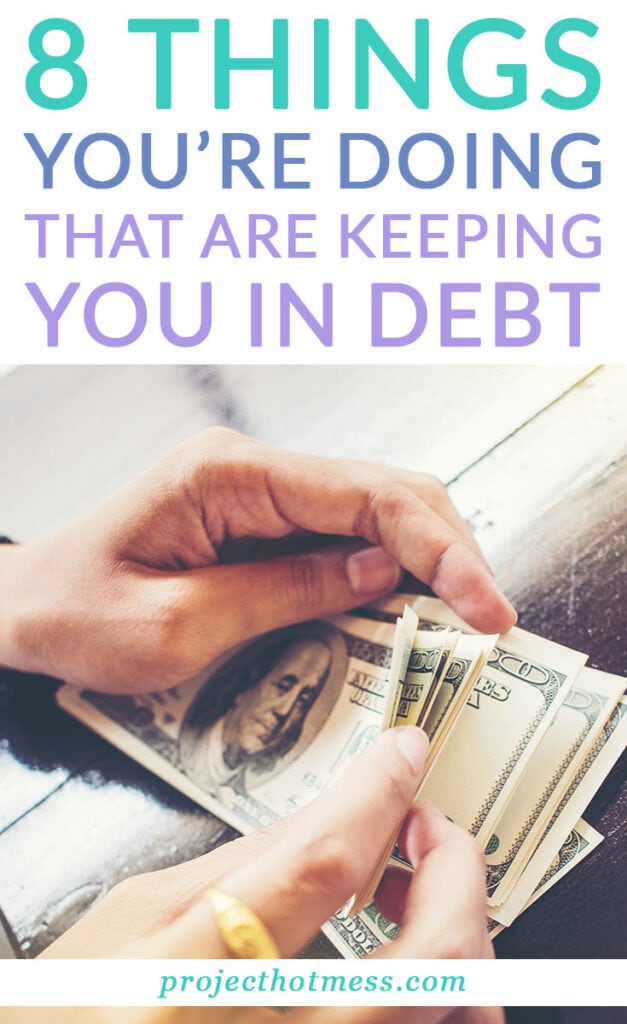 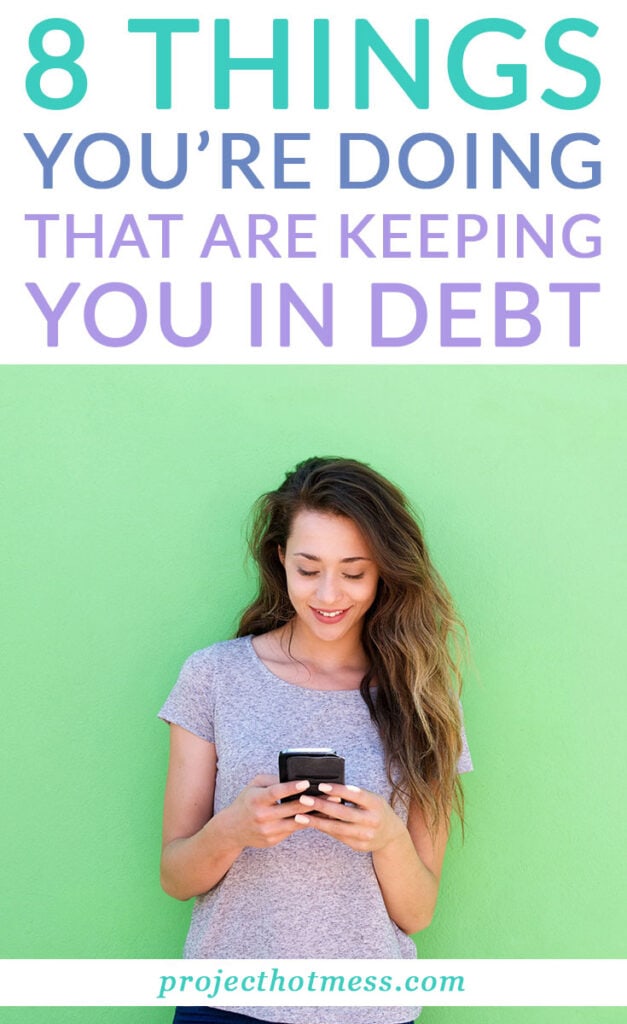 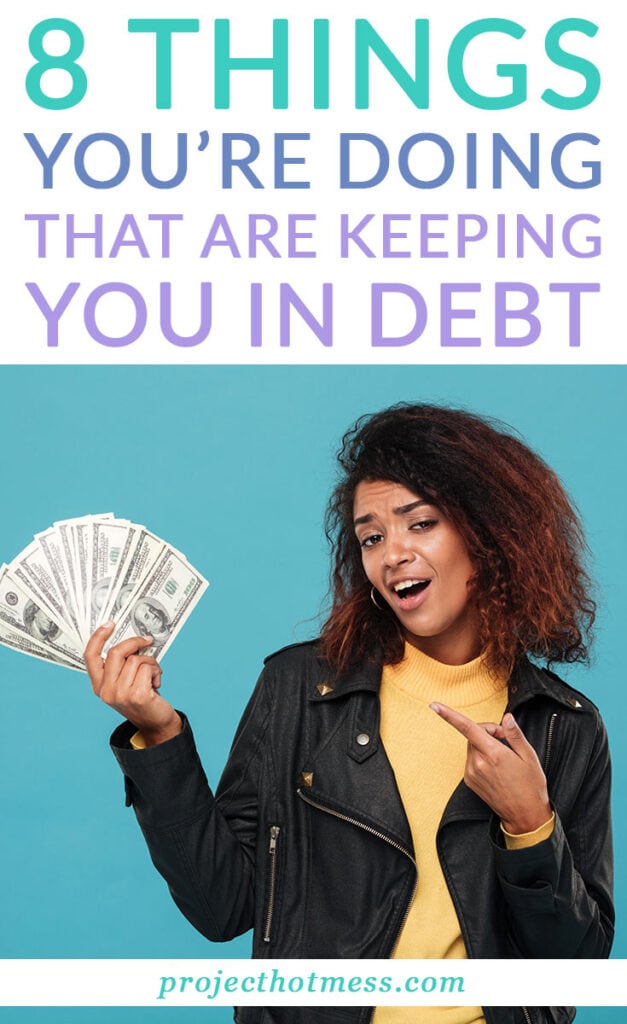 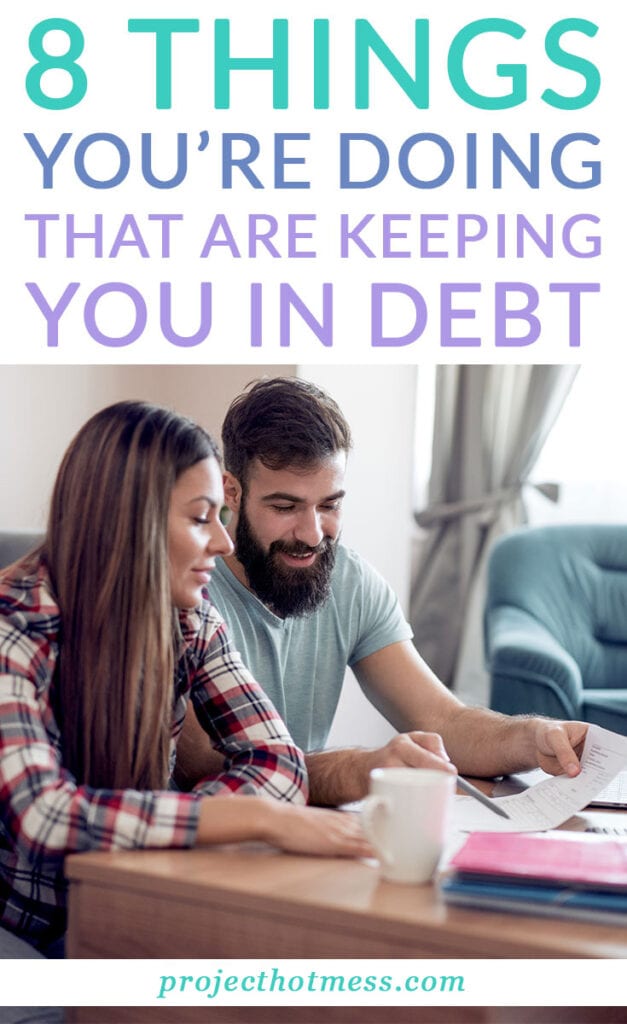 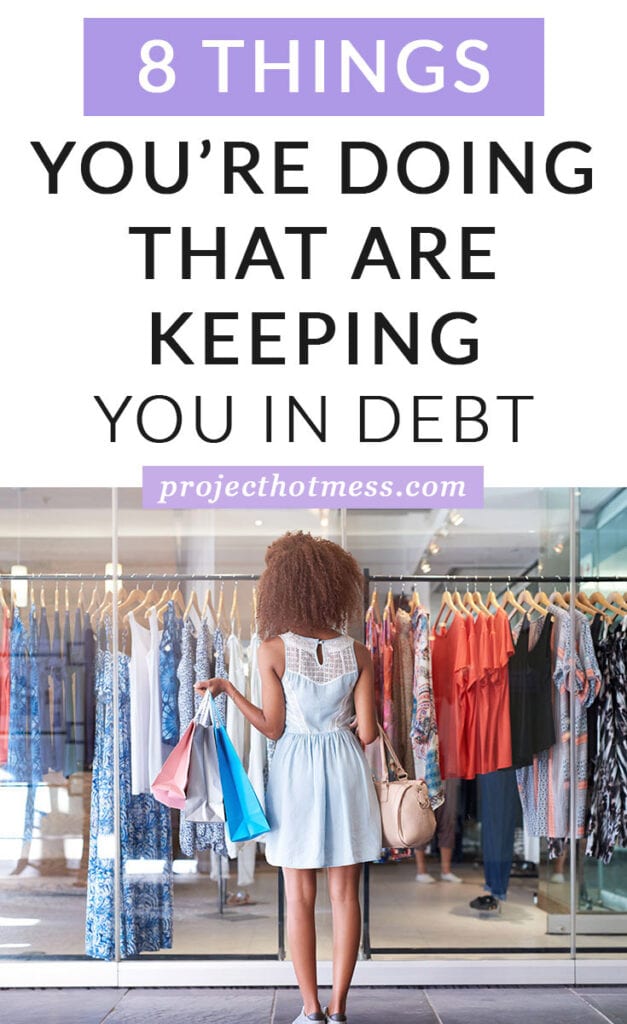 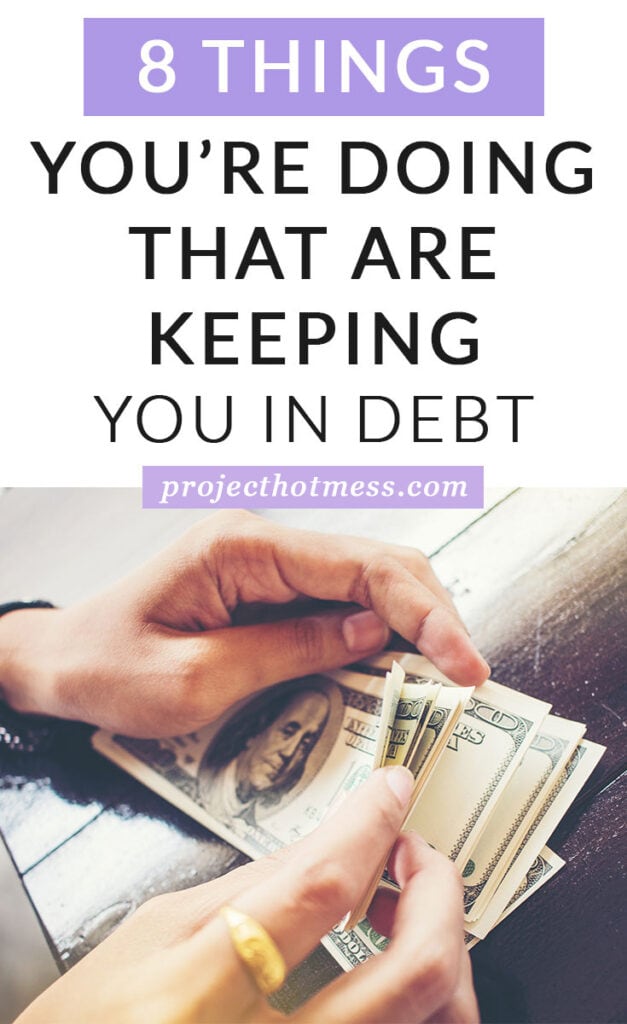 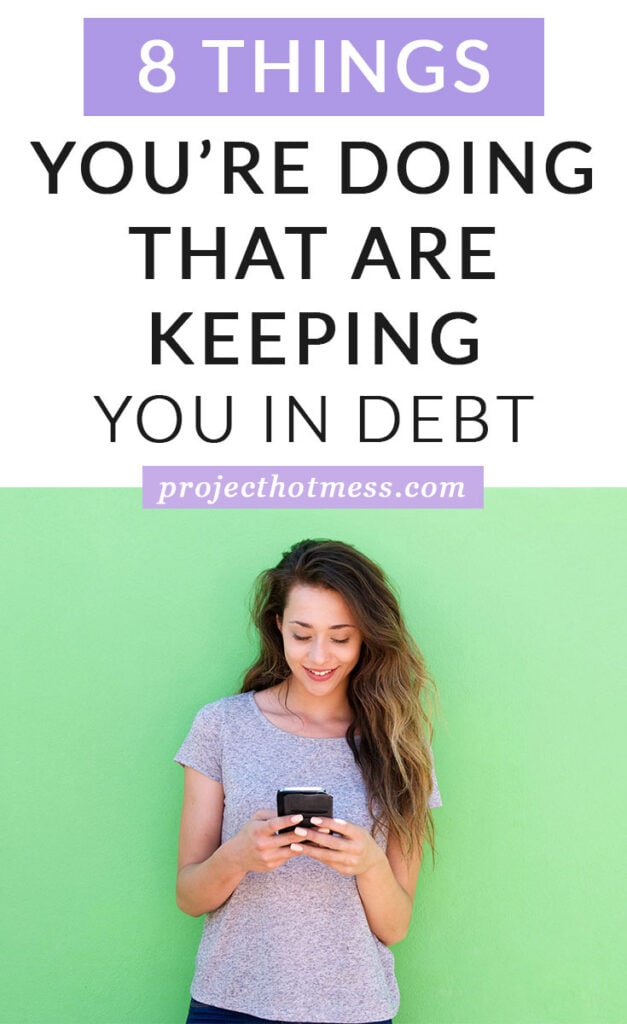 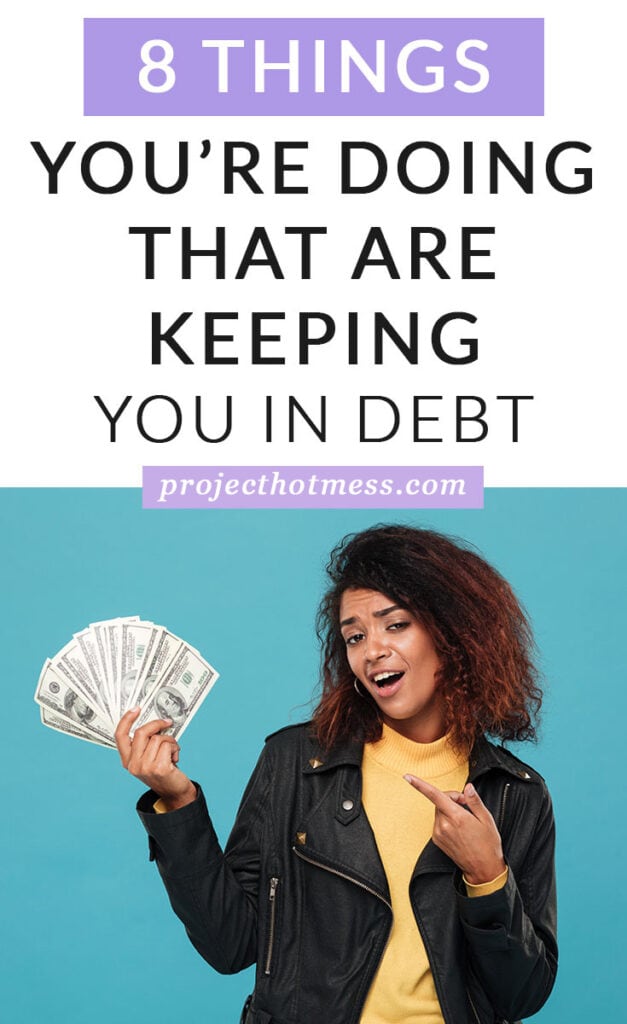 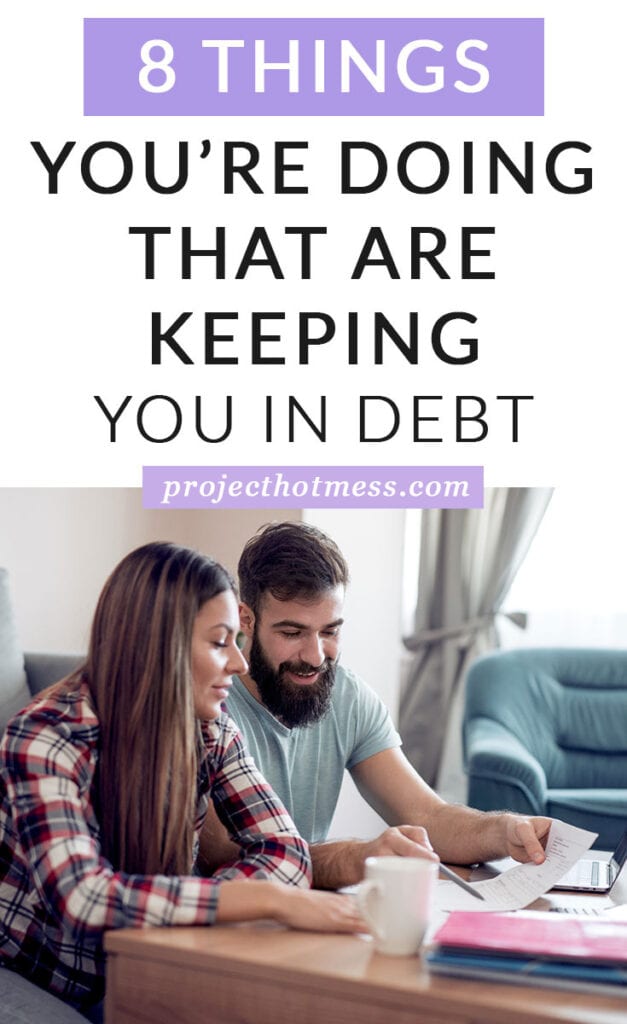 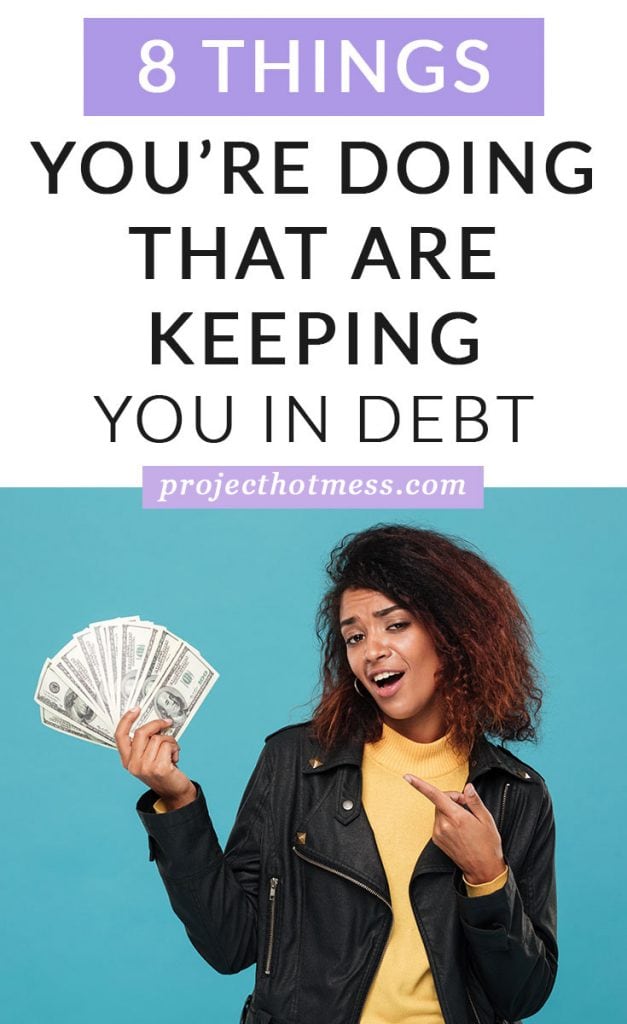 You’re not alone! Chances are there’s a few behaviours and actions you’ve got going on that are keeping you in debt without you even realising.

Don’t get me wrong, this isn’t a finger-pointing exercise at all. Half the time we don’t even know that we are doing these things, and sometimes we don’t even realise the impact they do have.

But at the end of the day, if you’re trying to get out of debt and break the debt cycle, then these are some of the things you need to be aware of.

So, if you’re doing any of these things that are keeping you in debt, stop them now! You’ll thank me for it later.

When you’re trying to make extra payments off your debt, it can be easy to feel overwhelmed and convince yourself that you’re not making ‘enough’ money to pay off your debt any sooner. It’s a legit concern and very understandable.

But here’s the thing:

In order to pay off your debt faster, you need to either spend less money, or earn more money. It’s as simple and as difficult as that.

So, while you may feel like you’re on a low income, you still have the ability to pay off your debt faster. You can cut your spending (there are so many different ways you can do this) or you can earn more money (again, there’s a whole heap of ways you can do this too).

Sometimes all it takes is stepping to the side and looking at your situation from a different angle. The ‘I’m so broke’ cycle is so hard to break, but the first step is with your mindset.

Did you know, if you had a $5700 credit card debt (the average American credit card debt), and only paid the minimum repayments, it would take you over 48 years to pay it off! And that’s providing you didn’t make any additional purchases with your card.

Do you know how long it would take you to pay off your credit card debt if you only paid the minimum repayment? You can check it out here – Credit Card Payment Calculator.

Paying only the minimum repayment on your debts is a bad habit to get into, and one that you can easily break.

You don’t have to double your debt repayments to make a big impact. Simply adding an extra $5 or $10 to a payment can make a huge difference.

How much extra you pay is not as important as the fact that you are paying more than your minimum repayment.

Do this on a regular basis and increase it as you can and you’ll keep a big difference in how quickly you can pay off and get out of debt. 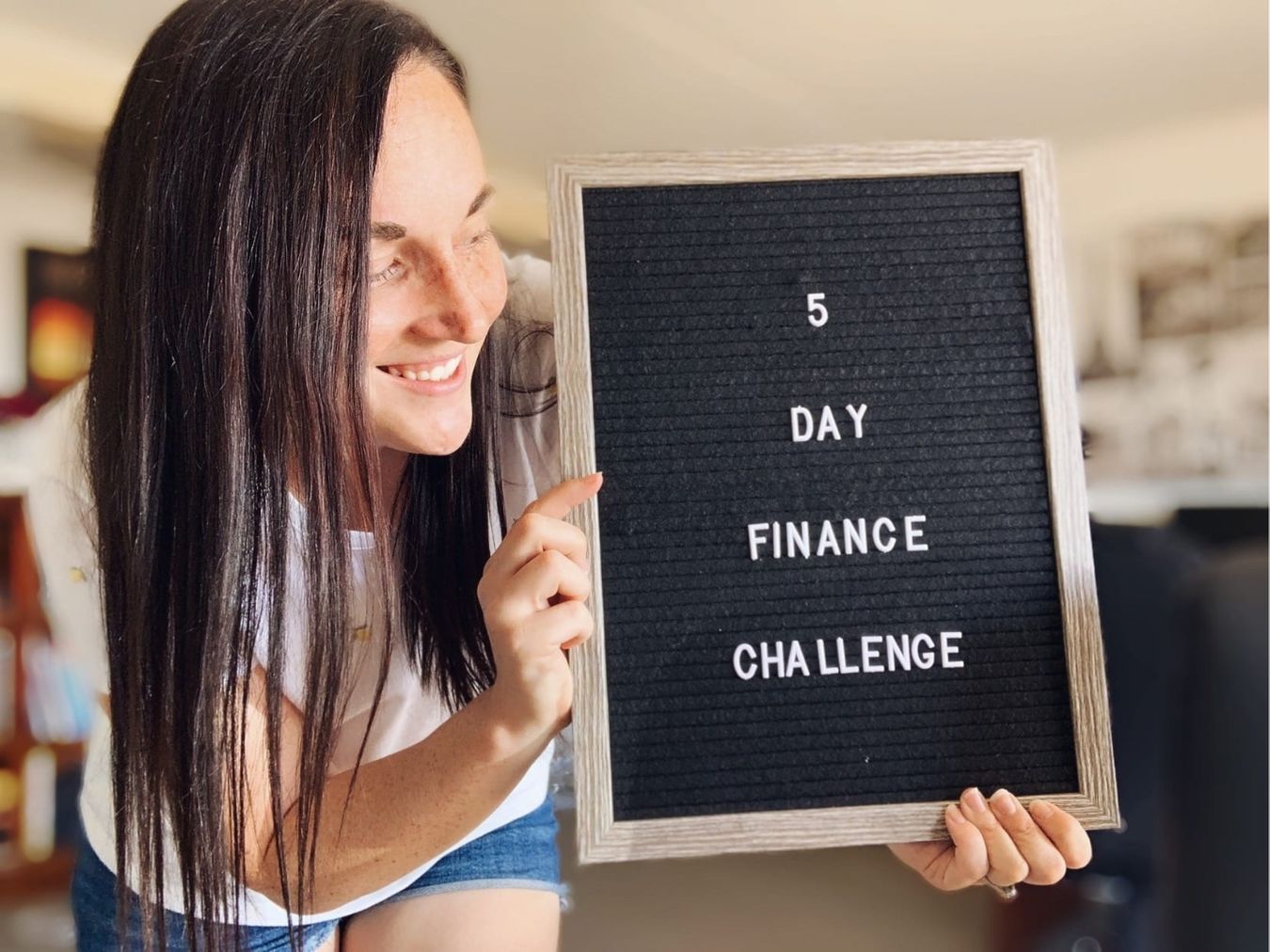 Learn how to create and achieve your financial goals with the free 5 Day Finance Challenge.

You’re in!! The first step in the challenge is already on its way to your inbox. Be sure to check your spam folder if you don’t see it in the next few minutes. – Krystal x

What version iPhone do you have? And before you say you don’t have an iPhone, the point remains the same regardless of brand. Phones and gadgets are one of the biggest temptations we have that keep us in debt.

Think about it. The latest iPhone was over $2000 here in Australia for the top model, and there is a new one released every year. And do you pay cash for your new phone? No… you sign up to a new contract with your telco and increase your phone bill.

I was seriously annoyed when I needed to buy a new phone. I did not want to spend over $2000 on something that was only going to last a few years, but I knew I had to for business and work, which just made me more annoyed.

But, the previous phone I had lasted me a few years longer than most, and even though I was tempted to upgrade to the latest, it is just such an easy way to fall into and say in the debt trap.

It doesn’t stop with phones. Bigger ticket items like cars can be a huge pull for debt. Getting a loan for a new car is such an easy debt to obtain, but can add years and years to your debt pay off.

And guess what? Chances are, once you’ve finally paid off the car, you’ll want to upgrade to a newer model and the cycle continues.

If you’re breaking your budget repeatedly, then you’re creating the wrong kind of budget.

Your budget isn’t meant to restrict you, it’s meant to help you manage your money so you know what’s happening at all times.

Allow yourself enough spending money and ‘fun’ money so you don’t break your budget, and be sure to allow for extra debt repayments so you aren’t just paying the minimum.

If you can’t work out how to make everything happen with the budget you have, then you need to revisit point number 1 of this article – spend less or earn more. It sounds harsh but it’s just basic maths.

Need a budget planner? Download this one now for free: 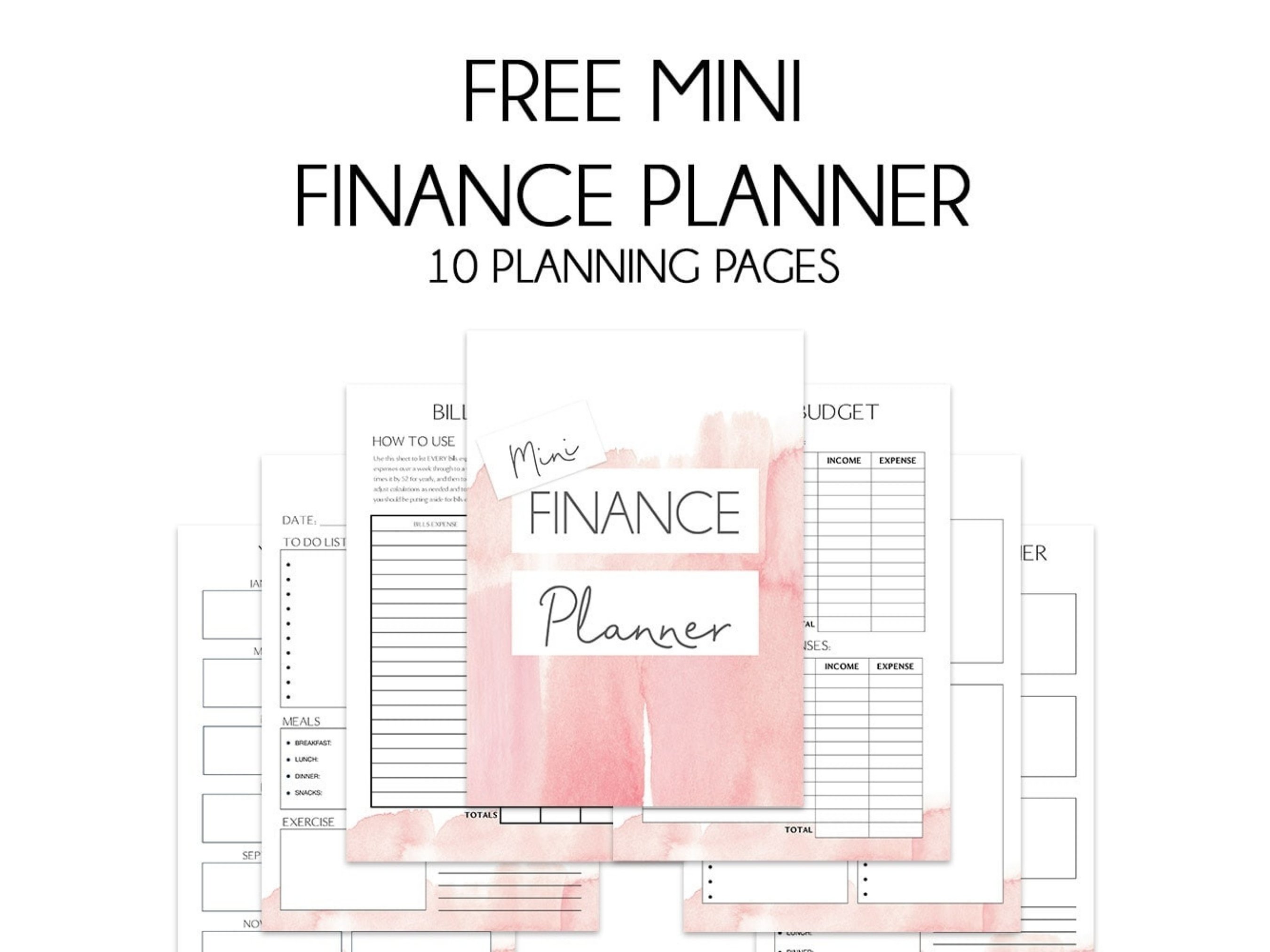 Your Finance Planner is on it’s way to your inbox right now! Be sure to check your spam folder if it’s not there within a few minutes.

While I’m on a roll with the hard truths, here’s another one:

If you’re in a boatload of debt (or any debt really) it’s because you’ve been living your life outside of your means. You’ve been spending money you don’t have.

If you want to get out of debt, it’s going to take a big sacrifice, and you cannot continue to live your life the way you have been (spending money that isn’t yours) and get out of debt. It’s just not possible.

Even now, as we renovate our house, we are still making big sacrifices to ensure we don’t put ourselves back into debt.

Paying off debt requires such a big sacrifice because you don’t get to spend the money you earn because you’ve got to use a portion of it to pay back the money you used previously that wasn’t yours.

6 – You Don’t Have An Emergency Fund

It’s not your money, it comes with an additional cost, and if you’re unable to control your credit card spending then you may find yourself in an emergency situation with a maxed out credit card and no way to pay for the emergency at hand.

So, with that out of the way, you need to have an actual emergency fund. One that is separate to everything else, that is used only in emergencies, and that by having it is there, you can have the confidence to know that if something were to come up, you’ve got the funds on hand to pay for it.

If you don’t have an emergency fund, and something big does come up, you may be tempted to go to one of the payday loan centres, or extend your credit in some other way, which always ends up costing more money and keeping you in debt in the long run.

7 – You Keep Adding To Your Debt

You cannot possibly get out of debt if you keep adding to it! It seems really obvious but it’s something that so many people overlook.

If you’re trying to pay off your credit card, but you’re still making purchases with said credit card, you’re adding to your debt.

And if it means you have to cut up your credit card until it is paid off, then so be it.

If you’re in a position where you’re in debt, then you need to buckle up and make the sacrifices to pay it off and not keep adding to your debt. The next point will help with this.

One of my most favorite tools for managing and tracking my money is PocketSmith. It syncs all of our finances, including our loans and assets – which means it shows us our overall wealth. It’s also great for finding and tracking changes in our spending (so we can budget accordingly). I’ve tried so many different apps and this is the only one that I loved. PocketSmith is so easy to use and my husband loves how he can see how much we have left in our budget at anytime.

Get on top of your finances by first analysing where you are right now. What do you owe and how much is that debt costing you.

Use this debt tracker template to get a good picture of what your debt situation is right now and create a plan to tackle it!

It’s easy to overlook these things when you’re paying off debt and not realise that these simple habits and behaviours are actually keeping you in debt. Now you know, you can make changes and see how positive changes towards your goal of becoming debt free! Good luck!