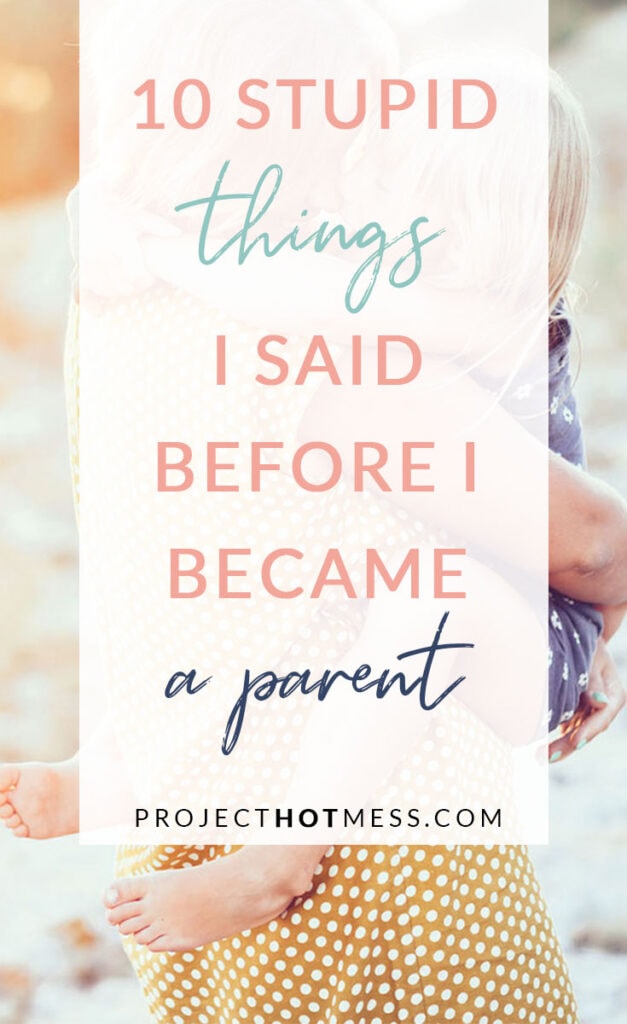 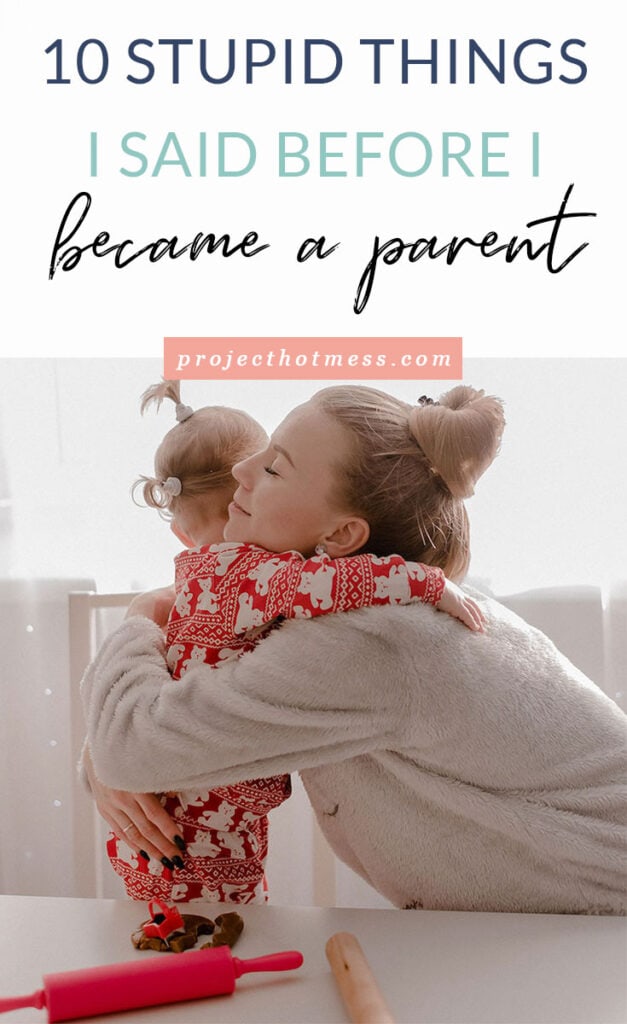 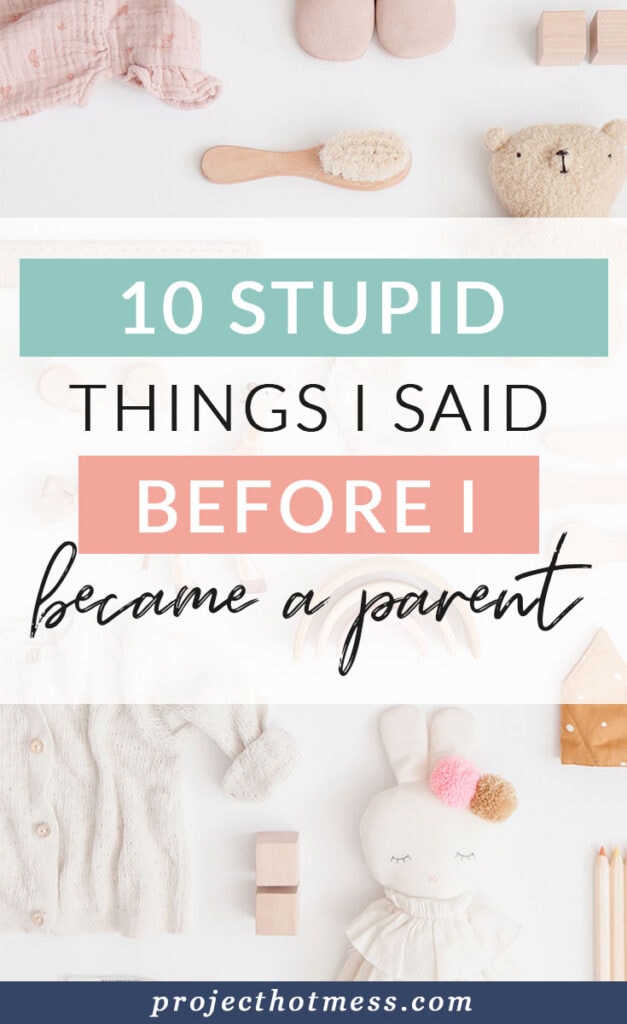 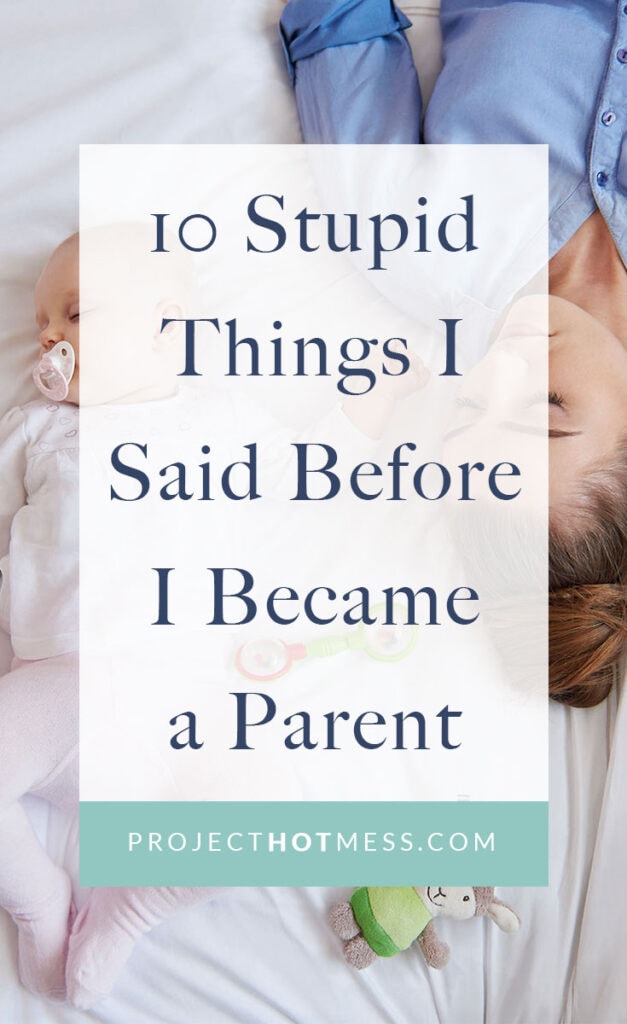 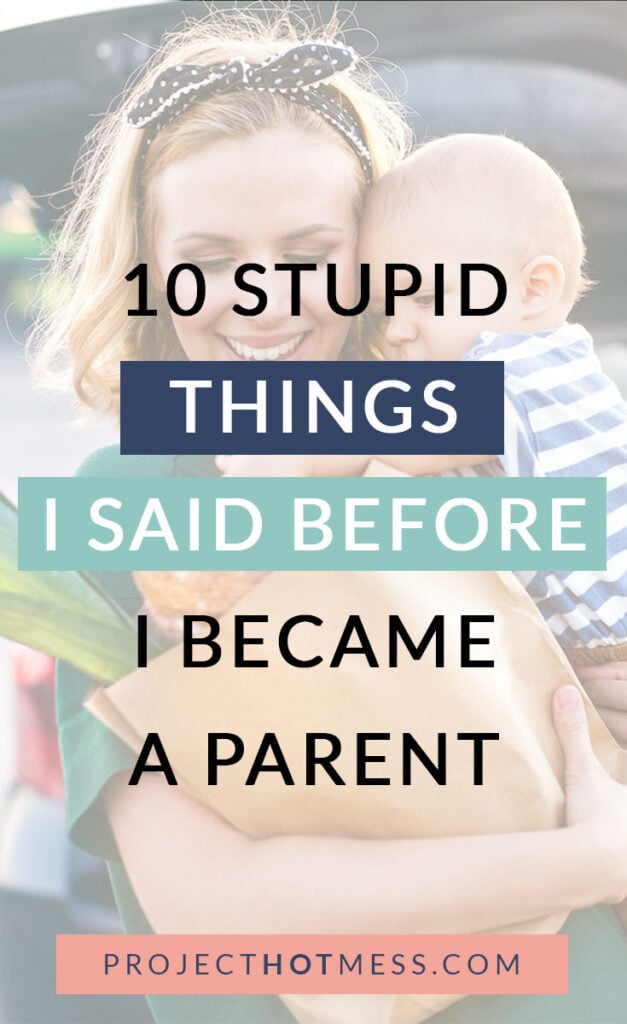 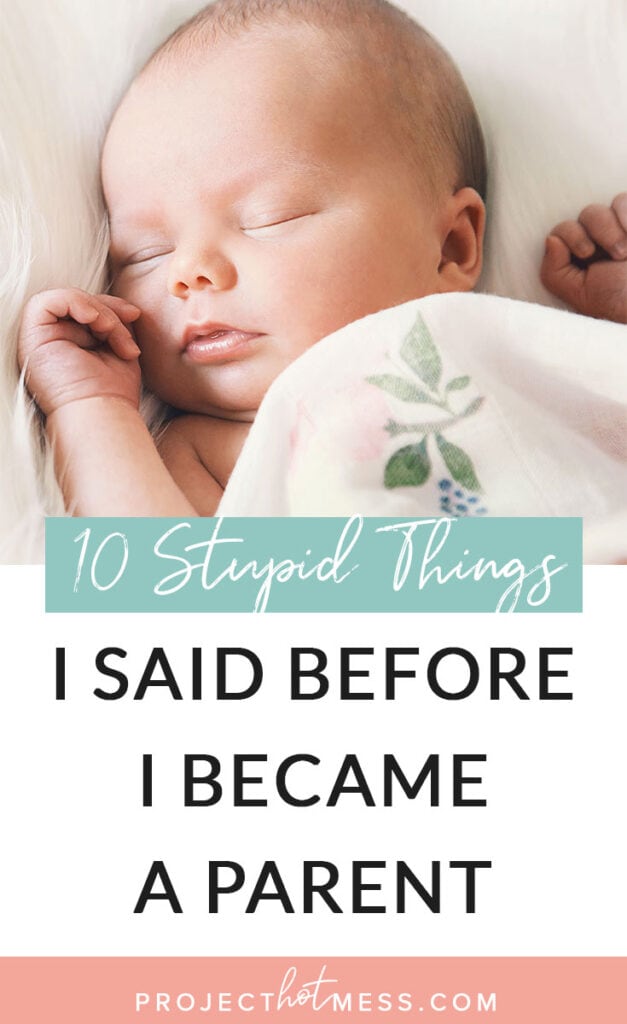 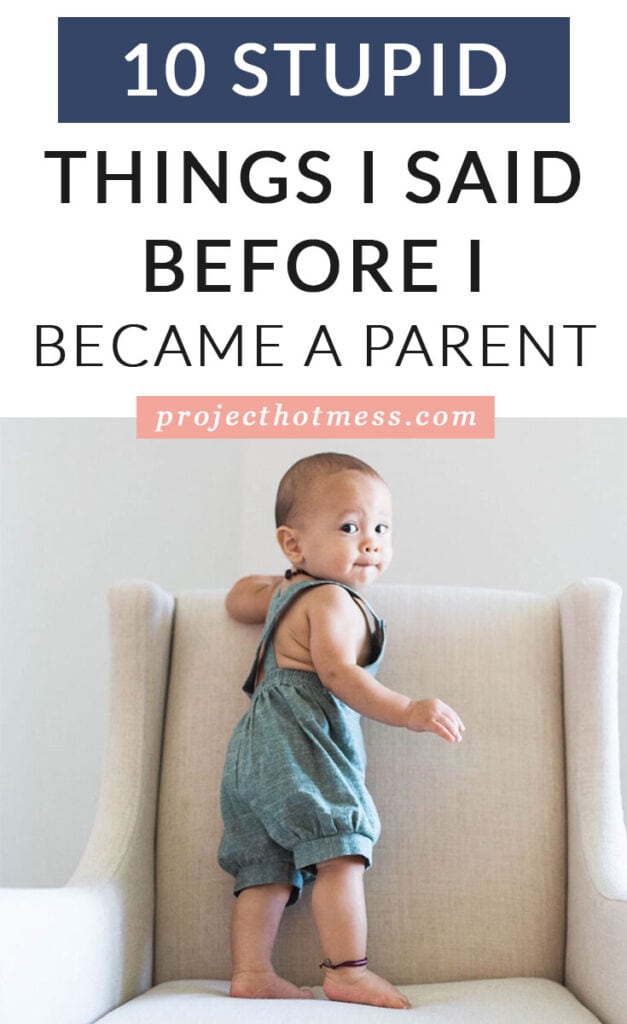 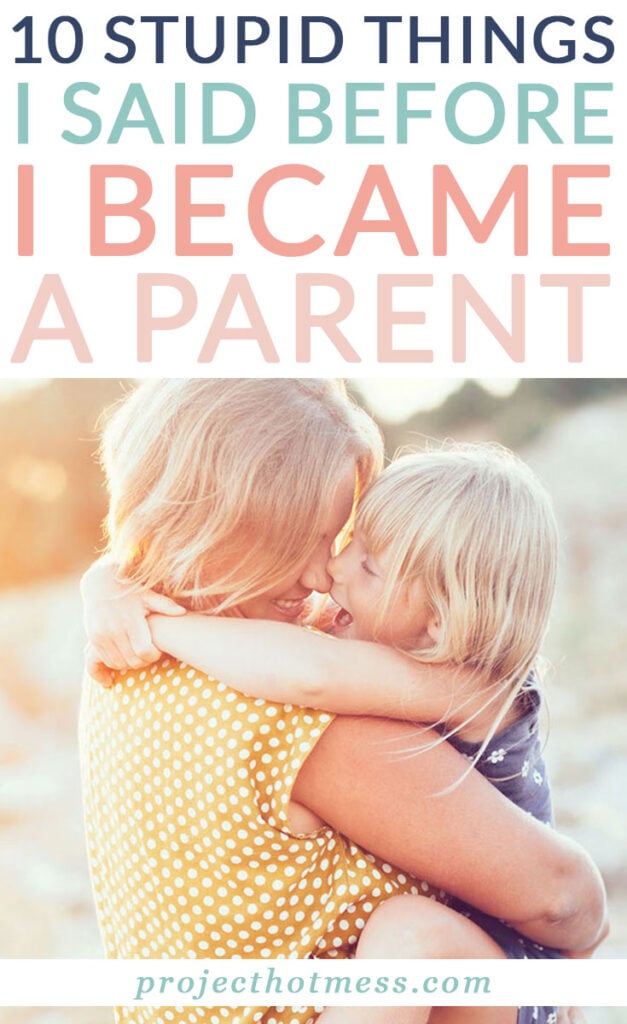 With the upcoming birth of my second child, it made me think back to all the stupid things I said before I became a parent. Oh, how I wish I knew as much as I knew back then… because back then I knew everything. Right? It’s okay, I’m not going to deny it, I thought I knew a whole lot about parenting – and in my defence, I wasn’t exactly uneducated either. But wow, what a difference a child makes!

We all know it’s true. When we are young, single and have no children we have a very different view on the world. It’s easy to sit there on our high horse and pass judgement on others. It’s easy to look on at the mother with the children throwing a tantrum at the grocery store and say ‘my children will never do that’ (news flash: yes, yes they will) and to see a child eating a donut and think ‘why aren’t they eating a healthy snack – my children will only eat healthy’ (again: no, no they won’t).

Not only did I have a baby that decided he didn’t want to sleep, he also had crazy reflux, which meant I had a ton of washing (thanks to vomit being on everything!!). I finally worked out that if I wore him in a baby carrier I could actually get some housework done while he slept peacefully (sleeping upright meant less reflux) but I definitely did not get to sleep when he did.

2 – I will only feed my children whole, organic food that is nutritious and well balanced.

Okay, to be honest, I still aim to achieve this, but I no longer beat myself up when it doesn’t happen. Teething children are monsters and when your child is refusing to eat because their gums hurt then you give them whatever food you need to in order to get by.

My son lived on sausages and mashed potato for days because that was all he would eat. Please don’t judge another parent for what they are feeding their kids – you have no idea why they are doing it or if that’s the only thing that’s getting them by.

3 – My children will never be allowed to watch television or use any technology.

Hmmm… did I really say this? Yes, I did. To be clear – I don’t endorse you sitting your child in front of a television all day but I am yet to meet a toddler who would actually sit still for long enough to watch a whole program anyway.

I love relaxing days watching a movie and having cuddles with my son. When he was younger we would put on a Wiggles DVD and get up and dance together, now we snuggle and watch X-Men or The Avengers. As for technology, my son knows how to do just about everything on my phone including taking selfies and opening to YouTube Kids. He learns so much by watching what I am doing and what others are doing and I don’t think this is a bad thing at all. He is learning, he is engaged and he is happy.

PS – I also have a DVD player in the car…

4 – My career will always be important to me and I won’t lose who I am when I become a mum.

This was the hardest thing for me. As soon as my son was born I would have happily walked away from my career as a Paramedic if I needed to. Prior to becoming a mum my job was everything to me, it was such a major part of who I was. After my son was born, I felt like I had to be everything for him.

Now as the years have passed I have slowly been able to get back to do things just for myself and rediscovering who I am. The biggest hurdle was learning that it was okay to be my own person, other than being a mum.

I think so many women struggle with this after they have their first child and it can cause so much guilt and unhappiness.

5 – I will never let myself look like one of ‘those’ mums and I will always take pride in my appearance.

I have lost count of the number of times I have quickly ducked out to the shops without even realising I had food/vomit/snot/milk/poop on my shirt. There have been days when brushing my hair was a major achievement.

Most of the time, especially when Alexander was younger, I would have around 5 minutes to get myself ready and whatever I achieved in those 5 minutes was it, it was a bonus if that included makeup. I certainly still present myself as best as I can but I no longer think I have to be dressed up to the nines to leave the house.

6 – I will teach my children to behave and they will never have public tantrums – I just won’t tolerate it.

Bahahahahahahaha. This one makes me laugh. I don’t know how I thought I was going to be able to control my children in this way but somehow I figured I would.

Children are highly emotional and they are still learning how to express those emotions. Usually, this expression comes in the form of a tantrum of some sort, and more often than not it is in a very public place with people watching on and judging.

7 – If my child becomes upset in public then I will stop whatever I am doing and just go home. It’s what they need.

It just took me two hours and four arguments to get out the door so I could come and get the groceries we need so we don’t just have jam and eggs in the fridge. I am definitely not turning around and going home now just because of one little tantrum.

Albeit, I learned quickly when the highly emotional times were and avoided them. Attempting to do groceries at 5pm, during Witching Hour (ask any parent, they know) is just asking for trouble, as is attempting to shop immediately before nap time. Just don’t do it.

8 – My children will fit into my lifestyle and I won’t sacrifice my social life just because I am a mum.

I truly believed this one. I was determined to make sure I would still go to lunches and dinners with friends and tried to hold onto the social life I had before Alexander came along.

It’s just not possible. And that’s okay. When you have a hungry baby you have to stop whatever you are doing to feed them, when you have a tired baby they need to nap and when you have a cranky teething child you need to do whatever it is you can to comfort them. Your children’s needs come before lunch dates.

But I assure you, it gets better. And you learn how to make it work for you. Instead of dinner dates, go for lunch dates at a local cafe that has a great kids play area. Work around nap times and feed times and make it work.

Or… get out on your own. Do whatever it takes to make it happen, and do it. It will be amazing.

9 – My children will have a limited number of toys and I will make sure they are used well.

For Alexander’s first birthday he was given so many toys it was incredible. This is something you can’t control. I don’t believe that requesting certain gifts is appropriate – if someone takes the time to choose something that they think Alexander would like then that is special and meaningful.

To avoid ‘present overload’ we allowed Alexander to play with a few of his toys from his birthday and put the rest up in the cupboard – every few weeks we get another toy down and this way he focuses on that toy and gets to play with it.

We also have a rule that if he gets new toys, we take some old ones and give them to charity. We have regular clean outs of the toy room and to be honest, he is the one who is excited to do it.

10 – My children will eat whatever I cook and if they refuse then they will go without.

Seriously? Firstly, refer to point #2… and then remember that this does not only apply to teething children. There will come a time when your child continues to refuse to eat the healthy meal you put in front of them that has a perfect balance of meat and vegetables and will continue to throw their food on the floor.

You will beg them… just one bite… please. You’ll try every type of ‘game’ to get them to eat. You’ll even resort to tricking and bribing them. It won’t work. In the end, they will just keep asking for toast and at some point, you’ll give in. Hey… at least they’re eating, right?

I seriously don’t know what kind of delusional world I was living in but becoming a parent has certainly changed the way I view a lot of things. I may not be perfect but my son is happy, healthy and growing so I must be doing something right…